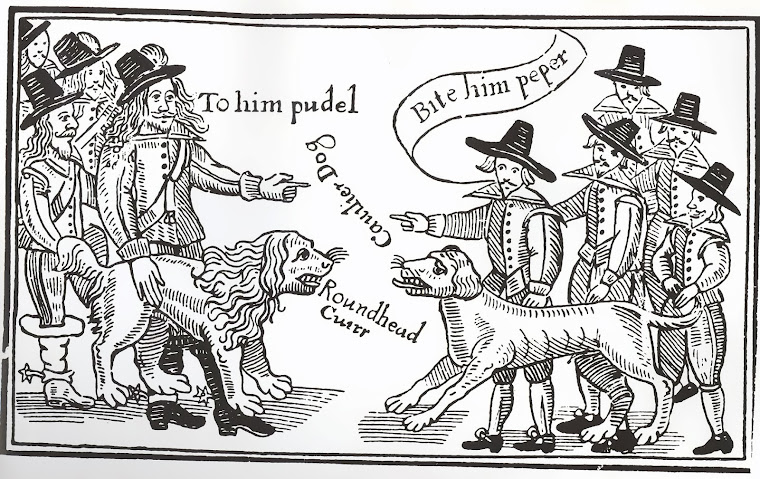 Finally, after quite a bit of delay I'm back on this project.  Real life issues like work, family, moving, and some gaming distractions [witness my Dark Ages blog, "Spear to the Strife"] have slowed this project down quite a bit.  But the Neal Thomas rules and some focus have me back at the ECW.

Goals at this point are to finish cleaning and assembling the ten command then the ten cavalry.  After that, it will be time for gap filling, then priming.  Still can't decide what colors to prime in, tempted to go with white to brighten the color palette in general but grey and tan are also possibilities.

So I've a pack of both, partly for variety and partly because I wanted very much to see what the Romanoff figures were like as sculptors usually try their best for command figures. EDIT: found the pics at the Old Glory UK site:
Romanoff Command Pack Pic @ OGUK
S&S have pics of both command packs.  Anyway, the packs are:
Romanoff = 40RTW3 - Infantry Command (5 figures), $17
S&S =  40ECW201 - Infantry Command A (officer-Sergeant-Drummer-2 Ensigns), $14.50
S&S Command Pack A pic 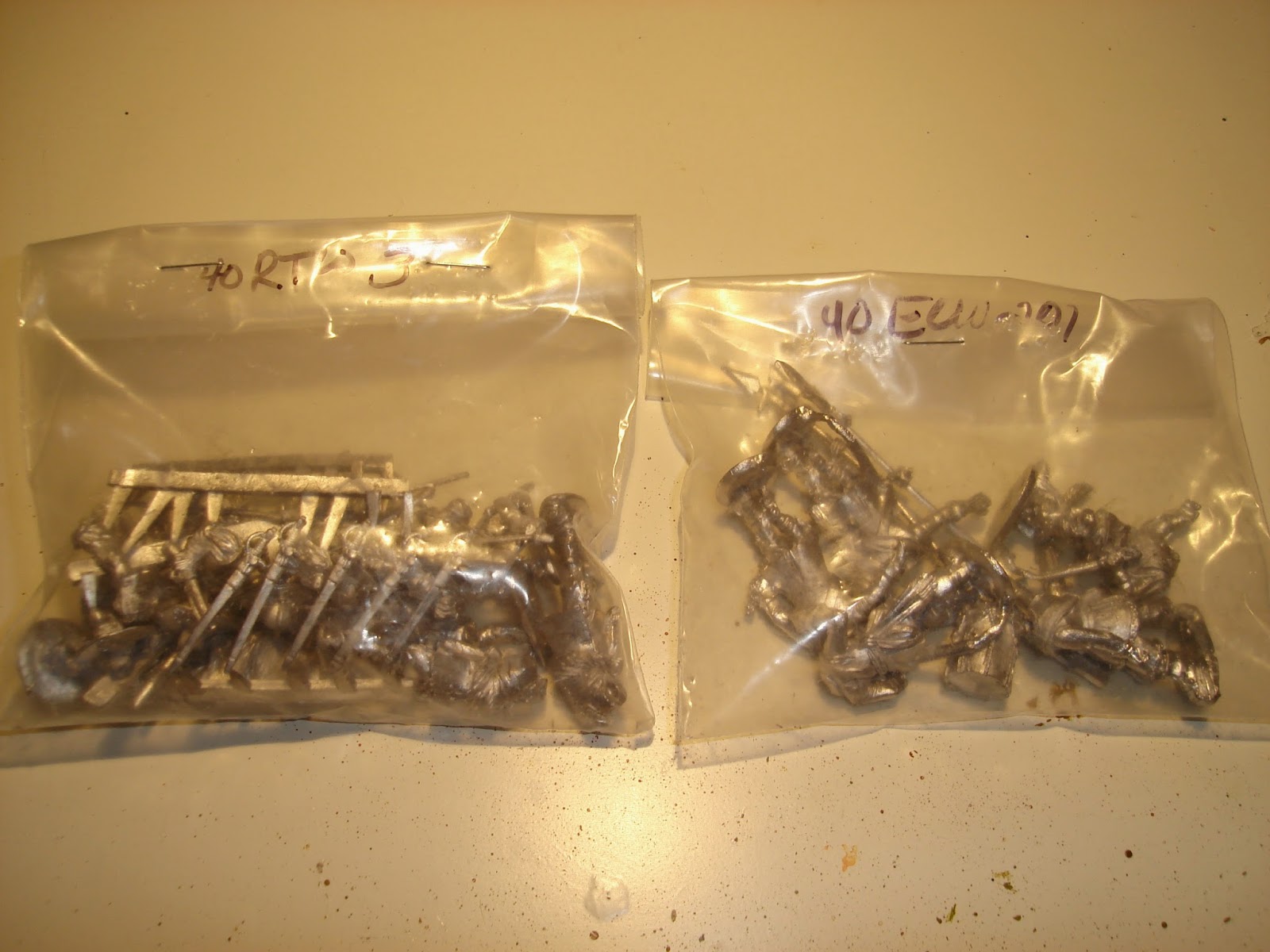 Romanoff on the left, Sash and Saber on the right.

There's a second Romanoff command pack 40RTW8 that has "officer in armor" in the description.  There's a second S&S command pack B that has officer, ensign, fifer, drummer, preacher.
S&S Command Pack B pic
I will find this obvious Parliamentarian pack irresistible!  Actually, I'll be getting them both...

Anyway, what is in them?
Well, there's one unfortunate problem, which is that I appear to have used the command bags as a place to store much of the extra bits for both makes, as well as having grabbed some of the bits out of the bag for use on my infantrymen.  Very sorry about that!  But there are some pieces that are definitely included in the command bags, so no doubts there.

The Romanoff bag has - more importantly than the bits - four identical bodies lacking arms and heads, with the fifth being different, slimmer, check out the pic.  The four certainly have a big buffcoat and turned down boots, the fifth just a regular coat, stockings and shoes.

Gear included is a selection of heads, a sprue or two of their arms, two arms with flag staffs, a sprue of their excellent swords in scabbards, an NCO halberd, and officer's partizan, and of course a drum.  All the poles seem a bit soft to me, and would need replacement with piano wire as they'll bend, rebend and then break, needing to be replaced anyway.  Hands included are pistol, baton, open, closed around pole [needs drilling], gesturing.  Plenty to work with. 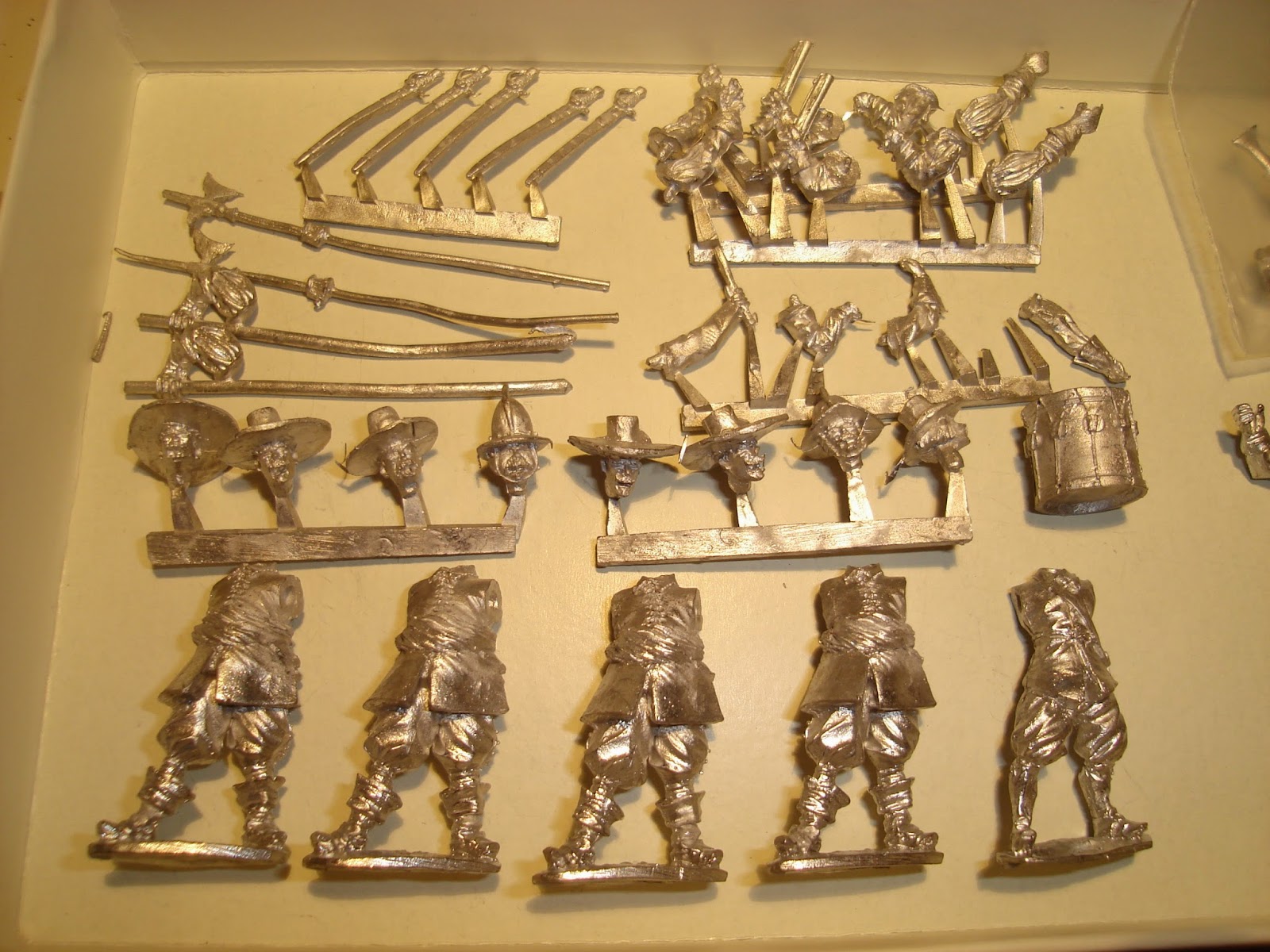 The Sash and Saber bag has five different bodies, as follows:

Gear included is a drum, an NCO halberd hand and an officer's partizan hand, both pole arms with tassles.  There's several heads including a bare one and of course an arm waving a hat.  Overall, if you are realistic about the variety of clothing that may be used in the field, most of the figs offer quite a bit of variety for poses in the command group or among the infantry, really.  Perhaps the only restrictive thing is the lace which should really be for officers - but then again, there's always looting, eh? 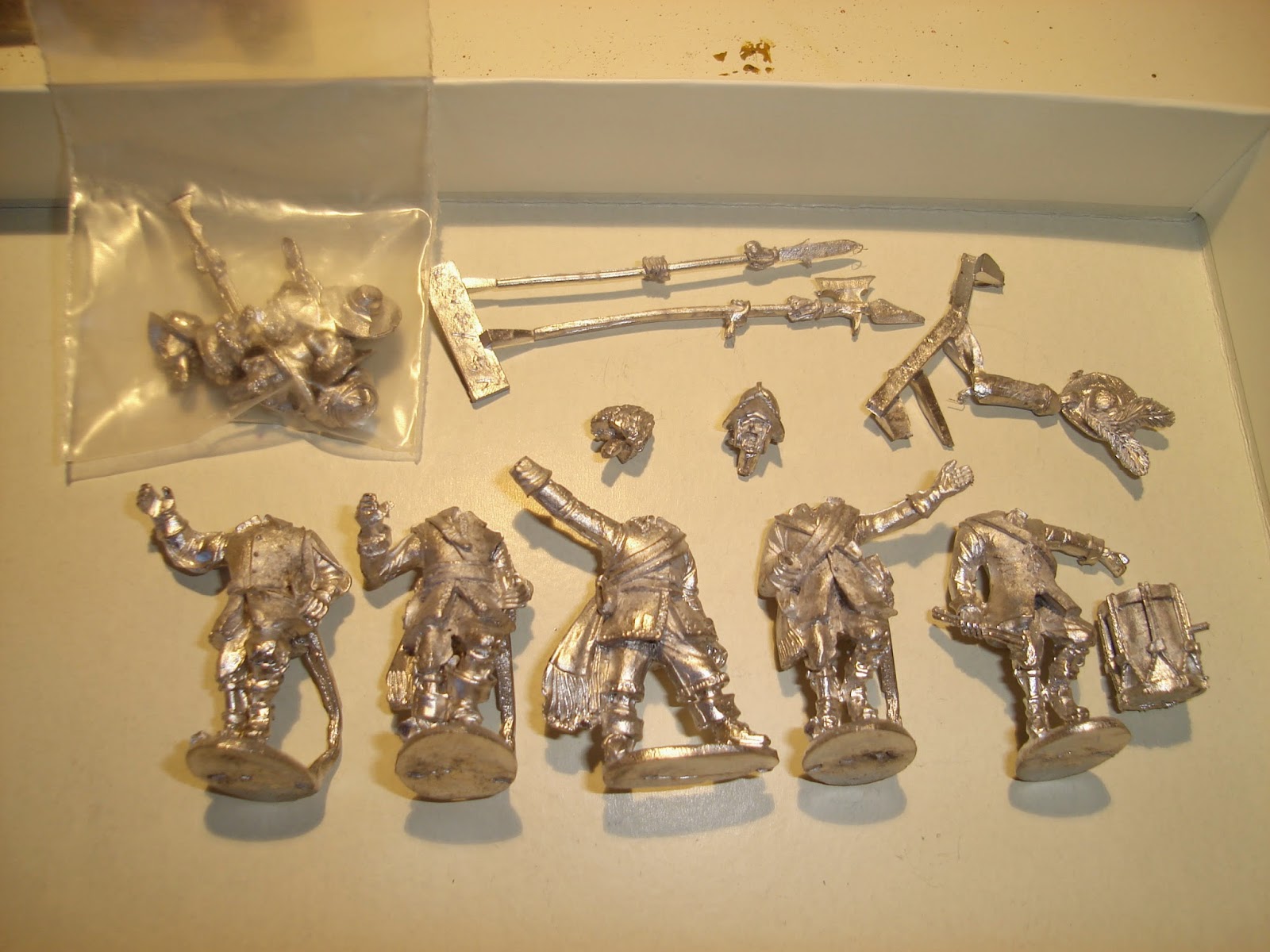 Size comparison: the 2nd from the start and end of the line are the Romanoff.  You can see that they run about 2-3 mm taller, mainly in the legs.  Still, people come in all shapes and sizes, so they should mix fine especially with heads and arms.  I think that I'll put two of the Romanoff in each group, where their sameness can be hidden a bit better with good posing and painting, not to mention arm/head selection. 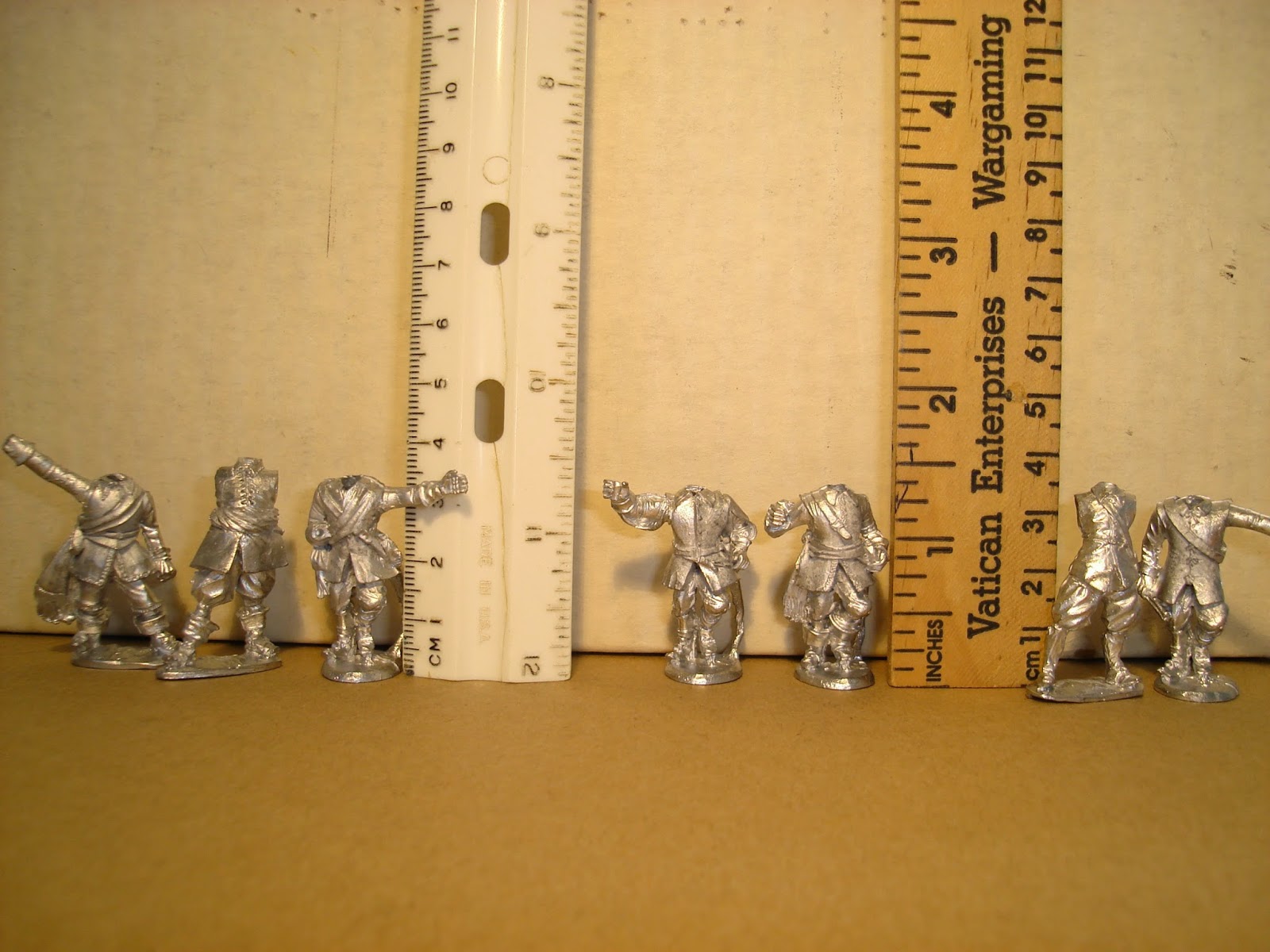 A bit blurry, but this photo shows the height difference a bit better.  Basing can also help - cutting down or raising up the figures base when mounting into units.  Not worried about it, actually just happy with the variety. 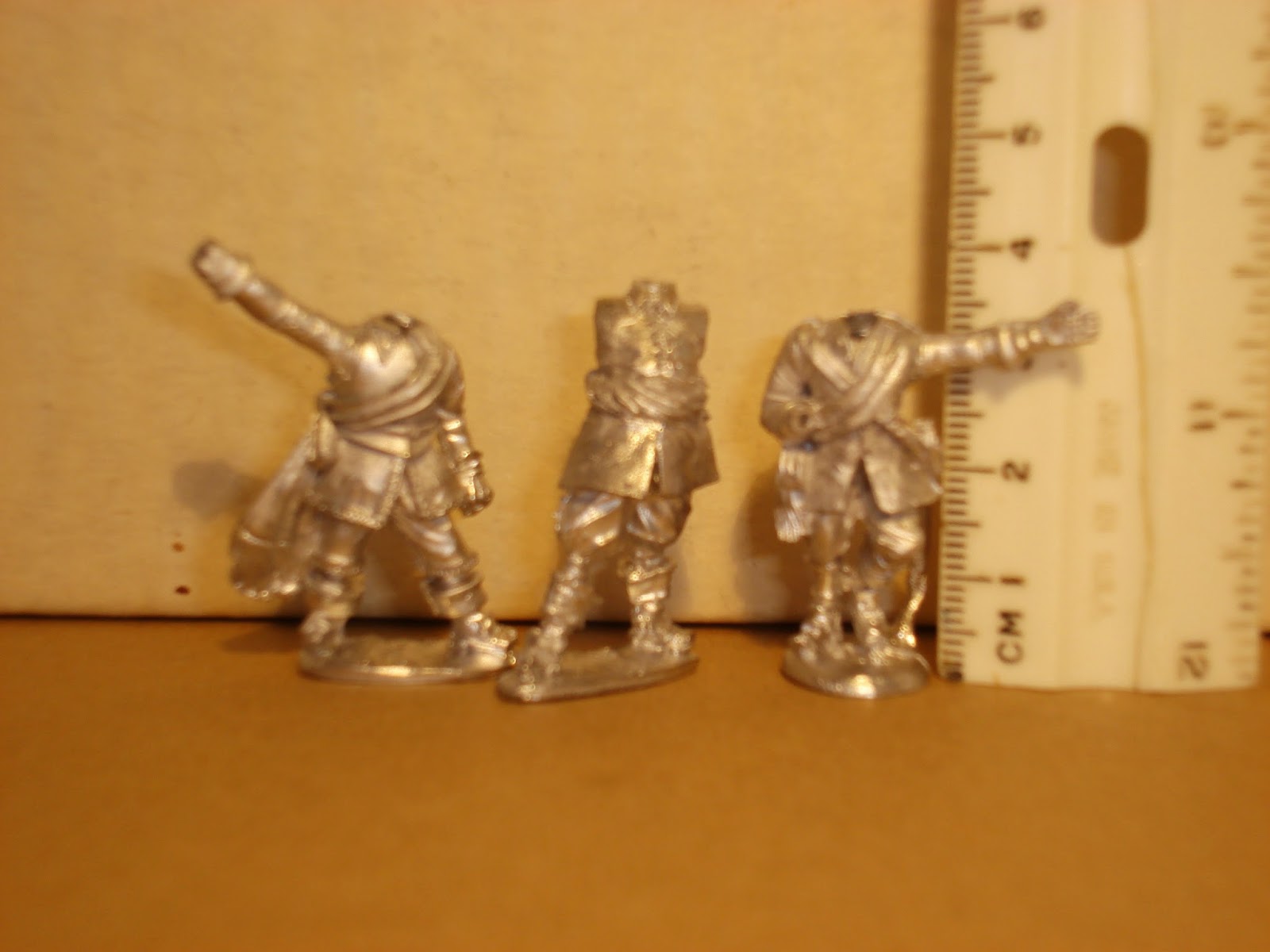 Next up will be cleaning and prepping, then of course assembly.  None of the figures has excessive flash or mold lines, but all have some.  Shouldn't be too much trouble, but how the heads and arms fit is important - dictates how much green stuff will have to be used to fill the gaps.

Excited to get to these, finally, after lots of delay!  All that's left after these bags is the 10-fig cavalry unit from S&S [7 troopers and three command], which I very much look forward to - ECW oddities and plenty of cavalry are a big part of the period's interest for me.